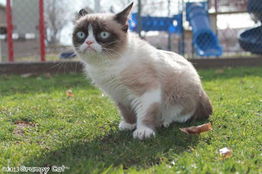 After gaining international fame through the Internet, Grumpy Cat has landed a Hollywood agent and a movie deal. Mr. Lashes, whose legal name is Benjamin Clark, became the Grumpy Cat’s representative in October.. Recently Mr. Lashes helped negotiate the sale of a film option based on Grumpy Cat’s persona to Broken Road Productions, the production company responsible for Adam Sandler’s 2011 vehicle “Jack and Jill.”

Mr. Lashes also has forged a deal with Grenade Beverage LLC to create and distribute a line of Grumpy Cat coffee-in-cans and bottled beverages. Excluding the movie deal, Grumpy Cat has earned a low-six-figure sum.

Besides Grumpy Cat, Mr. Lashes also represents the Keyboard Cat (which has earned roughly $300,000) along with Princess Monster Truck, a cat with an underbite. “When it comes to cats, Ben knows who is going to be big,” says Christopher Torres, a client of Mr. Lashes and the creator of Nyan Cat, a digital, square-shaped feline.

If your cat has become an Internet sensation, you may want to contact Mr. Lashes. To learn more about Mr. Lashes, click here.