Woman Saves Cat Tossed Out of a Truck 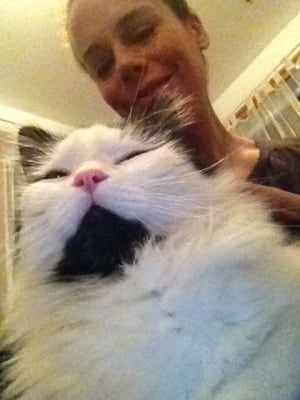 Corey Hardeman, from Wells, B.C., was driving through Hixon around dusk on Monday when she noticed the driver’s side door of the truck in front of her open.

Hardeman said she could barely make out the shape of a cat falling out onto the road, and saw it zip across the highway, narrowly missing another vehicle.

So she pulled over and got out to look for the cat.

While driving, Corey Hardeman saw a truck slow down, open a door, and toss a cat out on the road. After the cat narrowly missed getting hit by a car, Corey got out of her car and looked for the cat.

“And I sat down in the snowy, muddy ditch and called the cat for a good few minutes,” she said.

Eventually, the cat approached her and she scooped it up.

“He was wet, and he was just kind of slushy, and he smelled kind of funny,” she added.

Hardeman took the cat back to her home and named it Julian, but she remains furious that someone would do something like that to an animal. If you know of anyone who no longer wants a cat, help them find a way to get the cat to a shelter or some other safe place out of that person’s home. There’s no need to abandon cats in the wild where they’ll be frightened and ill-prepared to survive.

To read more about the woman rescuing a cat on the road, click here.