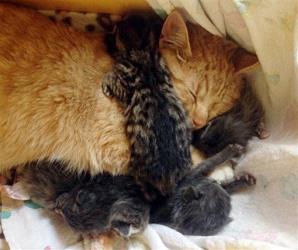 Henry’s brain disorder affects his coordination, but it hasn’t affected his behavior towards caring for these kittens. “It’s kind of unusual for a male cat to decide take on the role of mother,” said Heather Muench, “But he’s doing a fabulous job, and he’s probably increasing their chances of survival.”