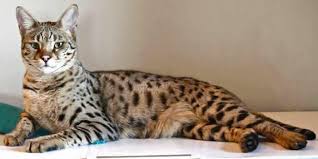 People in New Jersey may be used to seeing strange things on their streets, but most people in Paterson, New Jersey probably have never see a Savannah Cat. The large size and exotic appearance of the cat makes it look perfectly at home in the wild, but definitely out of place on the streets of New Jersey.

After several people reported it as a tiger or bobcat, animal control officers managed to capture it. Now they’re trying to find the owner of this cat, which could cost up to $30,000.

Why someone would allow such a rare and expensive cat to roam freely in the streets is not clear, but it’s likely the cat escaped from its home. Perhaps the cat may find a new home if the original owner fails to show up. Anyone want a $30,000 cat?