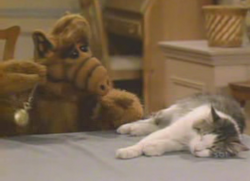 Think your cat might be an alien? Then you might be interested in browsing the cat entry for a wikipedia based on movies as if they were actual facts. For example, did you know that “It appears that cats remain relatively unharmed when near Xenomorphs as seen in Alien. However, it is possible that the Xenomorph saw the cat as a food source, but opted to pursue the humans either due to them being a greater source of food or posing a greater threat.”

Maybe you saw “Men in Black” and wanted to learn that “A cat called Orion, which had belonged to a member of the Arquillian royal family, was pivotal in preventing Earth’s destruction by the Arquillians, as it carried a miniature galaxy on its collar which was desired by both the Arquillians and the Bugs. The information that the galaxy was located in “Orion’s belt” tricked some people into believing that this was referring to the astronomical location known as Orion’s Belt.”

By pretending that your cat might actually be from outer space, you can be more tolerant of its desire to rule over you with an iron fist (or paw). After all, you don’t want to antagonize your future overlord one day, would you?