A Cat at a Bus Stop 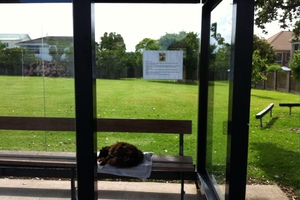 If you happen to catch a ride on a bus in New Zealand, you might see a sleeping cat named Merli at one of the bus stops. Merli is 17 years old, but when he was younger, he used to catch rides on the public bus and roam around town hopping on and off buses. Of course because he was a cat, he never paid for any of his rides himself.

Merli also used to wander down to a local pub where customers would feed him fish and chips. Now that Merli spends most of his time sleeping, he decided to spend his days at a bus stop. His owners worried about him so they posted a sign at his favorite bus stop, alerting strangers that Merli has a home so they won’t think he’s been abandoned.

At the bus stop, strangers pet Merli and shower him with affection while waiting to catch their bus. If spending your retirement years being fawned over isn’t ideal, then Merli has found a situation that could be the next best thing.