Save a Cat, Go to Prison 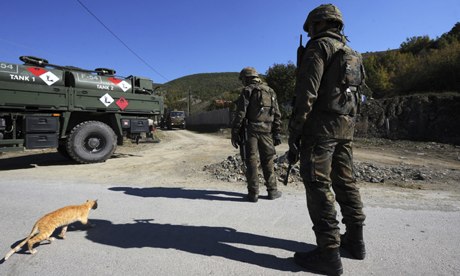 To prove that cats are often smarter than many human beings on this planet, Italian reservist, Lieutenant Barbara Balanzoni, is going to trial at a military court for saving the life of a dying cat while serving as medical officer at a Nato base in Kosovo.

Her commanding officer forbid anyone from bringing stray animals on to the base, but stray cats lived on the base anyway. One cat gave birth to kittens but was unable to deliver the last of her kittens, which were stillborn. Lt Balanzoni said “If the cat had died, the entire area would have had to be disinfected. What is more, the surviving kittens could not have been fed. So they too would have died and created an even greater public health problem. Far from disobeying orders, I was following military regulations, which state that, in the absence of a vet, the medical officer should intervene.”

In a perfect world, her commanding officer would be stillborn for trying to prosecute her over such as trivial matter. Hopefully other intelligent human beings will throw this case out and reward Lt Balanzoni for her effort.