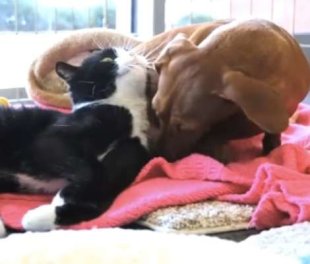 In Florida, animal shelter officials discovered a 2-year-old dachshund protecting a 7-month-old paraplegic kitten by a gated driveway. The daschund, named Idgie, was guarding the cat, Ruth, by barking and growling if someone came too close. Ruth can only move by dragging herself by her front legs.

Seminole County Animal Services Diane Gagliano said, “Both of them were found in fairly good shape, not filthy or malnourished, so it seems as though they probably had a home at some point.” Yet no one claimed the pair so the shelter kept them together since Idgie got so unhappy being separated from Ruth.

When you see the affection these two animals have for each other, it makes you realize that people could learn a lot from animals. Now if only people treated each other with as much kindness, the world would be a much better place.

Click here to read more about Idgie and Ruth.