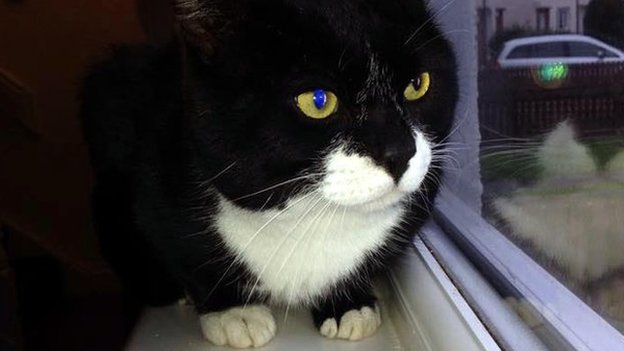 Sheen was just a kitten when he disappeared in Bothwell, North Lanarkshire, the week before Christmas in 2012.

His owner, who wishes to remain anonymous, said: “I was not thinking of getting a cat in the first place, but I saw one in a litter that was different – scrambling to get out – and I thought ‘that is the cat for me’. Sheen started to be allowed out, but one day could not be found. I searched for about three months – lost and found sites, drove around, chapped every door. I feared he had been catnapped, or hit by traffic, or caught by a fox.”

As it turned out, Sheen wound up thirty miles away where a kind lady fed him and eventually took him to a local vet who discovered Sheen had a microchip implanted. Through the information in that microchip, the vet was able to locate Sheen’s original owner and return Sheen back home, two years after he had escaped.

Now Sheen is happy at home and his owner is happy to have Sheen back after all this time. To read more about Sheen’s disappearance and return, click here.