The Role of Cats in War 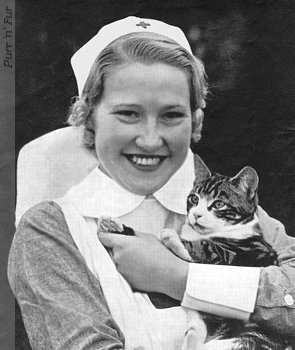 During war, dogs and horses have historically been used as both weapons, companions, and utility animals. However, cats have been used in war time too, but cats are smart enough never to be used as weapons or utility animals. After all, a horse may be dumb enough to pull a cannon closer to an enemy that might shoot it, but a cat would never do that.

In case you’re wondering what cats actually did in various wars, you can read a series of stories about how various cats served in the military without sacrificing their own comfort in the process. During the Crimean War (1854-55) it was reported that some captured Russian soldiers were found to be carrying kitten mascots beneath their coats.

During World War II, cats helped guard food stores and were deemed so important to the war effort that thousands of them were donated by the British public and also by the US via a Cats For Europe scheme, with an official powdered milk ration for ‘all cats engaged in work of national importance’.

So you can see that cats prefer to work in war where they won’t risk getting shot at, much like generals do in today’s wars. If you want to find the safest place in a war, just look for the nearest cat and follow it around.