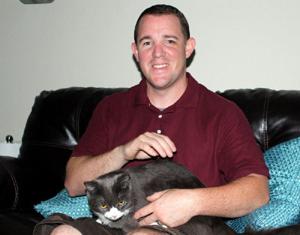 When Chance the cat saw an open door, he took the opportunity to rush out. Ryan, Chance’s owner, happened to open a door when Chance was nearby and he rushed through. Ryan and his wife immediately posted signs around the neighborhood and event spread the word though social networks like Facebook and Twitter.

Three months later, a neighbor spotted a stray cat and set out a non-lethal trap. Amazingly, it happened to be Chance. After three months of being on the streets, Chance is back where he belongs.

To read more about the cat’s return home after a three month long absence, click here.