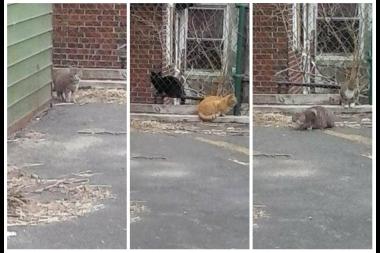 For several years, animal lovers have been feeding stray cats behind a bank in Astoria. Volunteers from Astoria Cat Rescue have been trapping, neutering, and releasing stray cats in the bank parking lot for four years. Then one day, bank officials refused to let them leave food out for the strays or capture them any more.

Astoria Bank officials declined to comment on their recent actions, but animal lovers believe neighbors were complaining about the number of stray cats defecating in their yards. Yet if the feral cats aren’t caught and neutered, they’ll just continue breeding and make the problem worse.

This proves once and for all that many animals, especially cats, can be smarter than many human beings. When you look at the politicians people vote for, it’s hard not to believe that cats have superior intellect after all.