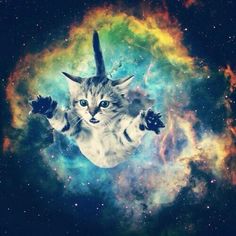 Cpt_Shinobi, a member of Elite Dangerous’ Fuel Rats, dedicates their video game lives to rescuing ill-prepared space explorers who find themselves stranded without fuel, often light years away from civilization.

Unfortunately during one rescue, a cat interfered in a rescue operation and wound up killing both the rescuer and the person hoping to be rescued. Cpt_Shinobi said, “After a successful rescue in Col 285 Sector KB-X A17-3 a feline co-pawlot aboard the responding Fuel Rat’s ship activated the ship’s boost. The resulting collision caused the loss of both the client and the Fuel Rat’s ships.”

Hopefully when humanity does explore the stars, they’ll be prepared for the interference of a cat from fouling up any rescue operation.

To read more about the cat wrecking a rescue operation in a video game, click here.