Cats Obey the Law of Physics 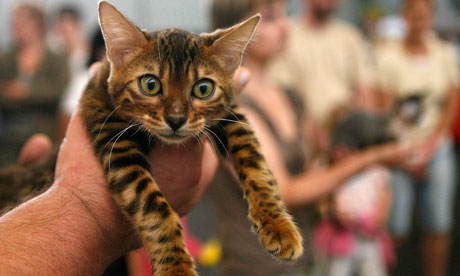 Everyone knows that cats rarely obey traffic laws or human commands, but you may be heartened to know that even cats must obey the law of physics. In 1969, TR Kane and MP Scher of Stanford University, in California, published A Dynamical Explanation of the Falling Cat Phenomenon, which is one of the few studies about cats ever published in the International Journal of Solids and Structures. Kane and Scher explain:

“It is well known that falling cats usually land on their feet and, moreover, that they can manage to do so even if released from complete rest while upside-down … numerous attempts have been made to discover a relatively simple mechanical system whose motion, when proceeding in accordance with the laws of dynamics, possesses the salient features of the motion of the falling cat. The present paper constitutes such an attempt.”

Rather than toss cats in the air and watch them fall, the scientists created a mathematical abstraction of a cat using two imaginary cylinder-like chunks, joined at a single point so the parts could (as with a feline spine) bend, but not twist. Using a computer to plot the theoretical bendings of this theoretical falling chunky-cat, they noticed that the motions resembled old photographs of an actual falling cat.

Since scientists have now proven that cats must obey the law of physics, the next step is for scientists to figure out how to get cats to obey human commands, but that research may take another few million years to figure out.