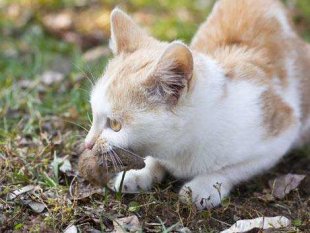 Paul Gaylord, who lives with his wife at the rural foothills of the Cascade mountain range in Oregon, found his cat, Charlie, choking on a mouse after being missing several days in the woods one Saturday in 2012. Gaylord tried to clear the cat’s throat but was bit on his hand. Soon Gaylord developed a high fever, flu-like symptoms, and large lumps in the glands under his arms, When Gaylord went to the hospital, doctors diagnosed him with bubonic plague.

“I knew rodents could carry the disease, but I didn’t realize I could get it from my cat,” Gaylord said.

While bubonic plague is still rare, it’s possible to get it. The next time your cat looks ill, it could be more serious than you might think, so get your cat checked out as soon as possible.