Where to Pet Your Cat 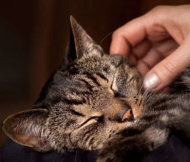 Cats can be friendly, especially if you know where to pet them. One area you probably don’t want to pet a cat, unless the cat gives you permission, is the belly. That’s because the belly represents a vulnerable area that houses the internal organs, so many cats will get extremely defensive if you touch their belly. Only cats that completely trust you will let you touch their belly.

Instead of trying to pet a cat on its belly, pet a cat where the scent glands are such as on its head (chin and ears) and base of the tail. Most cats like being stroked in these areas so when approaching a strange cat, these are safe areas to touch.

Then again, it’s usually best to avoid touching any cats unless you can trust them. In ancient times, there was even a saying that warned people not to touch a cat unless they had a glove, so if people back in ancient times were wary of touching a cat, then you should be too.

To learn more about where to pet a cat, click here.