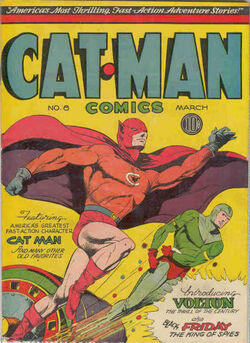 Nearly everyone has heard about superheroes like Batman and Spiderman but there have been several attempts to create other superheroes as well. One of the oddest failed attempts was a comic book series involving a superhero named Catman and his sidekick named Kitten.

Catman began as a young boy, traveling with his family through the jungles of Burma when bandits kill everyone but the young boy. Alone in the jungle, the boy gets adopted by a tigress, who teaches him the powers of being a cat, which presumably doesn’t include meowing at the top of his lungs until someone opens a can of cat food for him.

When the boy, now a man, returns to America, he’s horrified at the crime he sees, so he dons a costume and fights criminals under the guise of Catman. Later, Catman encounters an orphan and takes her under his wing. She later helps him fight criminals under the disguise of Kitten. If the idea of Catman and Kitten coming to bring justice sounds a bit far fetched, you can see why Catman’s comic book series eventually died off.

If you want to read more about Catman comics, click here.