Dinah the Alice in Wonderland Cat 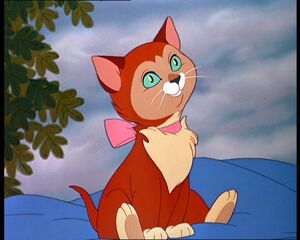 Cats seem to play such a large role in our physical world that it’s no surprise that many people love cats in the virtual world of the Internet and viral videos as well. However if you go back to 1951, you’ll see that Disney made an animated version of “Alice in Wonderland.” While Alice is the star, she also has a cat named Dinah.

Dinah doens’t do anything but meow and follow Alice around in the beginning of the story and the end. However Dinah is loyal and friendly, and when Alice falls down the rabbit hole, Dinah stays on top and waves good-bye to her as she falls. For playing such a minor role in the story, Dinah is amazingly fun to watch anyway.

To read more about Dinah the cat from Alice in Wonderland, click here.