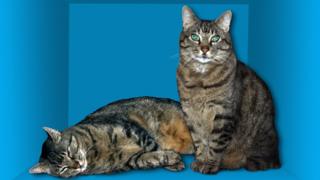 Nothing makes life more enjoyable than a cat, so it’s no surprise that one of the most popular science topics is Schrodinger’s Cat. In case you’ve never heard of this, Schrodinger’s Cat is a physics thought experiment to explain the weirdness of quantum physics.

The idea is that if you put a cat in a box with a 50/50 chance of dying, quantum physics says the cat is both alive and dead at the same time. Only after you peek inside the box will you determine which state the cat will permanently be in.

US-French scientists recreated this experiment (but without actual cats) and actually determined that not only could a cat be both alive and dead at the same time, but it could also be in two different locations at the same time.

So the next time something knocks over a vase in one part of the house and shreds a curtain in another, it might not be two cats but the same cat using quantum physics.